Six (gasp) new tracks this week. One from the Missingno Tracks:

Those last two should be quite familiar. We also have two from Pokemon Black and White:

Additionally, I wanted to share insight into the fictional "Pokemon DJ Hero" game. I'll let you in a good story about one of them:

Combination of: High Touch! 2009 and Kiss Him Goodbye

Back in late 2008, right around the time I got the original High Touch! single, I also picked up the 12" (vinyl) remix EP of Kiss Him Goodbye (I've been a Nylons fan for quite some time, and given that they were quite big here in Madison, it's not much of a surprise this turned up here). As some of you probably know, the chorus of Kiss Him Goodbye, much like High Touch!, contains the phrase "Hey, Hey, Hey". The combination was obvious.
Posted by Steven "Yoshi" Reich at 10:12 PM No comments:

Yet another seven new songs this week. Two from Pokemon Black and White:

Two from The Missingno Tracks:

-Argent Vexemon (Ice Path)
-May I Have This Swords Dance? [Canalave City (Day)]

And three from the Pokemon anime:

Additionally, there's a new interview from last week's Midwest TCG Regional. Another one should be coming soon.
Posted by Steven "Yoshi" Reich at 9:33 PM No comments:

Another seven new tracks this week. Two from Pokemon Black and White:

And two from The Missingno Tracks:

-Home Is Where the Luvdisc Is... [Hearthome City (Day)]
-My Friend Mudkip (Dewford Town ~ Surfing)
Posted by Steven "Yoshi" Reich at 9:59 PM No comments:

Once again, seven new tracks this week. Two from Pokemon Black and White:

-Clash of the Titans [Battle (VS Trainer)]
-Divine Olivine (Violet City)
Posted by Steven "Yoshi" Reich at 10:42 PM No comments: 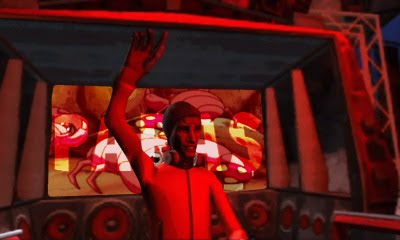 An unnamed source from FreeStyleGames recently revealed to PokéPress/PIRN that they had been working on a Pokémon DJ Hero game for the Nintendo 3DS. The game, originally scheduled to be released in 2012, was cancelled after Activision, the publisher of the Hero series of music games, laid off its music division earlier this year.

“After seeing our 3DS demo at E3 in 2010, Nintendo approached Activision about producing a Pokémon DJ Hero game for the system,” the source stated. “With the upcoming release of Black and White, they were very eager to capitalize on the wave of nostalgia that the new generation of games would bring.”

The source went on to describe some of the core features of the game. “Basically, we needed to make sure this was both a genuine Hero game and a Pokémon game. One of the ways we did that was by taking locations from the games and the anime and using those as venues. For example, we were planning on recreating Wigglytuff’s Guild from the Mystery Dungeon games and the city from the fifth movie.”

In addition to familiar venues, the game was also slated to offer a wide selection of characters from the franchise as DJs. “That part was actually a lot of fun. We really liked the way some of the Pokémon would use their wings or beaks or claws to scratch the records. For Mewtwo we even had it so it wouldn’t actually touch the records-they would just move on their own and glow like they were being manipulated psychically.”

To complete the package, FreeStyleGames planned to include unlockable Pokémon that could be transferred to Black and White, similar to the Pokémon Ranger games. “One of the things we’ve always been working on with the Hero games is how to keep the player interested and playing through the entire game. This was a unique opportunity to give the player something more lasting than a new outfit or character they might not end up using.”

Finally, the source provided a list of mixes slated to appear in the game:

Aaron Carter vs. Vanilla Ice-(Have Some) Ice with the Funk
Russell Velázquez vs. Rob Base-It Takes Two 2B A Master
Joshua Tyler vs. Rick Astley-Never Gonna Give Up Pokémon-Are You?
Mai Mizuhashi/Sky Boys vs. INXS-Kick No Message
Rika Matsumoto/Megumi Toyoguchi vs. The Nylons-Kiss 2009 Goodbye
James Willams/Babi Floyd vs. MC Hammer-U Can’t Rap This
M2M vs. The Jackson 5-Don’t Want You Back
The B-52’s vs. The Backstreet Boys-The Chosen One (Larger Than Life)
Westlife vs. Super Mario Galaxy Orchestra-Eggs Without Wings
Russell Velázquez vs. The Chambers Brothers-Time to Celebi-R-A-T-E
Blessid Union of Souls vs. The Fray-My Brother Saved My Life
Mewtwo Strikes Back Orchestra vs. Santana-Tears of Victory
“Weird Al” Yankovic vs. “Weird Al” Yankovic-Angry White Boy Polkamon
David Rolfe vs. Bonnie Tyler-I Want to Hold Out for a Hero
Russell Velázquez vs. INXS-What, You Need Pokémon? World…
Mewtwo Strikes Back Orchestra vs. Paula Abdul-Coldhearted Mewtwo
Dream Street vs. Miley Cyrus-Pokémon Can’t Be Tamed, Understand?
Presidents of the United States of America vs. “Weird Al” Yankovic-Can’t Stop Ridin’ the Bus
Yvette Laboy vs. The Pussycat Dolls-Misty Hates This Part
Johto vs. Lady Gaga-Pikachu’s Bad Romance (Buneary Mix)
Emma Bunton vs. Alysha-(Dreams) Free Up Your Mind
50.Grind Feat. Pokémon Allstars-Gotta Catch `Em All (Beat Juggle)
Maddie Blaustein vs. Amy Winehouse-Nobody Don’t Like Rehab
Posted by Steven "Yoshi" Reich at 7:52 AM No comments: