This time we have two segments. In the first (0:46-41:27), Anne from Pikapi Podcast is back again to debate the merits of the English and Japanese ending themes of Pokémon Heroes. These two songs provide quite a contrast, so you should find it interesting.

Our second segment (41:53-58:29) is a series of interviews from the recent Oceania International Championship in Melbourne, Australia. I had a chance to interview some of the top finishers, as well as a collector of Pokémon merchandise.

Posted by Steven "PokéPress" Reich at 8:56 PM No comments:

The following is an interview with Daniel Martinez, one of the top four finishers in the Masters Division at a recent League Cup event in Madison, WI, who used a Lycanroc deck for the tournament.

Where are you from, and how did you get into the Pokémon TCG?

I was born and raised in Stevens Point, WI. I started collecting Pokémon cards as a child when the very first set was released, however I didn’t actually learn how to play until August 2015, around the time the Ancient Origins set came out. I got into playing the TCG from a friend who invited me to a league event one night, and from there I was hooked.

What’s the basic strategy of the deck, and why did you end up using it for this tournament?

So, funny story-my friend and I were talking about this deck and I told him it could be a good deck and he disagreed, so I actually made this deck just to try and prove him wrong. The strategy of the deck is to get the Carbink out so EXes can’t hurt you, then get the Carbink BREAK out and use the attack “Diamond Gift” to start powering up Rockruff/Lycanroc on the bench. I also ran Hammers to make it harder for my opponent to get themselves powered up. 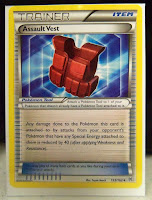 What are some other important cards in the deck?

Definitely the Silent Lab Stadium card as it can shut off Volcanion’s “Steam Up”, as well as taking care of Shaymin EX and Hoopa EX, which makes it harder for the opponent to set up as fast as they would like. Also, the Strong Energy turned out to be the one of the most important cards, especially for Shaymin and Yveltal as they have Fighting resistance, which makes it hard to one-hit KO them. Another important card to mention would be Assault Vest. It reduces damage from defending Pokémon who have special energy attached to them by 40, so it really saved me against Mega Mewtwo decks.

Overall, the deck flowed pretty much how I wanted it to. The energy removal from Crushing and Enhanced Hammers allowed me to get a jump on opponents, especially ones with high energy cost attacks.

What didn’t work so well, and what might you change if you used this deck again?

I never accounted for the fact that I had no way to get my Rockruff back from the discard pile. This cost me a game against a Mega Mewtwo, where my opponent just kept switching out my Rockruff and knocking them out in one shot (they have only 60 HP). I had no way to get them back so my deck was essentially shut down. I’d definitely want to run Super Rod in the future.

Posted by Steven "PokéPress" Reich at 9:17 PM No comments:

An insider from a major American record label recently revealed to PIRN the existence of a shelved tribute album, originally intended to be released as part of 2016's Pokemon 20th anniversary celebration. The album contained a number of re-arranged covers of Pokemon songs performed by a range of artists. According to the information provided, the album was put on hold shortly after the release of Pokemon Go, as the resources needed to support the game forced The Pokemon Company to shift its focus. The source did not know of any immediate plans to revive the project.

According to the source, in early 2015, The Pokemon Company approached several labels about the possibility of having some of their performers do a cover of one or more songs. In some of these instances, The Pokemon Company suggested specific combinations of songs and artists, and in other cases it was left up to the label. Either way, artists were encouraged to tweak the songs to better fit their style.

Production continued through 2015 and into 2016, targeting a November 2016 release. However, as the album was nearing completion, Pokemon Go was released, placing an unexpectedly high demand on employees at The Pokemon Company, forcing them to assign the individuals working on the album to other tasks. The future prospects for the album remain uncertain.

The insider was able to provide a partial track list:

Double Trouble (Team Rocket)-Fall Out Boy
Misty's Song-Katy Perry
The Legend Comes To Life-London Symphony Orchestra
Pokemon Johto-Pentatonix
Nobody Don't Like Christmas-Mannheim Steamroller
Aim To Be A Pokemon Master-2Cellos
Posted by Steven "PokéPress" Reich at 5:00 AM No comments: