There will be a new Geek.Kon 2011 interview following today's Top 25 Countdown. Of course, you can watch it here too:

Note: The following article describes a technical deficiency with PIRN. If you don't want it to be spoiled, stop reading this article.

Recorded music generally has space between songs. For vinyl records, this is indicated by a visible blank space on the surface of the disc: 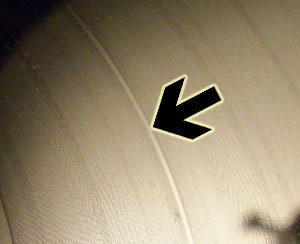 (This is actually my copy of the Italian "PokéDance" EP. The record is so horribly scratched I can't use the music on the station. Nice to finally get some use out of it.)

These gaps make it easier to find specific tracks on the record. While they don't have visible gaps like records, the practice of having these silent passages has carried over to cassette tapes, CDs, and is still present in digital downloads today.

While this might seem like a good feature, in radio, silence is generally the worst thing to have playing. The common term for this is "dead air", a name which should give you a pretty good idea of how bad it is. For the listener, these spaces between tracks can feel like an eternity (at least, they do to me when I listen to radio online).

While it is possible to manually edit the audio in an editor such as Audacity, there is actually a way to remove silence without manually trimming (and then re-encoding) the file. A helpful utility called mpTrim can detect and remove silence from both ends of an mp3 file (in digital audio, tracks often contain a small amount of silence at the beginning and several seconds at the end). With a single click, it will automatically attempt to detect the actual beginning and end of the sound. Of course, you can preview the new start and end points and adjust them as necessary before saving.

There's one other feature of mpTrim worth mentioning. As I said earlier, this article exposes a technical fault of the station. Despite what you might think, the tracks on PIRN don't actually crossfade-there is no actual overlap where two tracks are playing at the same time. Instead, by adding a short (usually one tenth of a second) fade on each end, the illusion of a crossfade can be created.
Posted by Steven "Yoshi" Reich at 5:31 PM No comments:

6 more new tracks this week. Three from the Pokemon Anime:

And three from the Victini movie:

A week or so ago I conducted an interview with The Key to Progression, creators of an OC ReMix released earlier this year. The 2-part interview will be on the station following Sunday's Top 25 Countdown.

Or you can just watch it here:

And three from the Victini movies:

Another week, another six tracks. Three from the Pokemon anime:

And three from the Victini movie:

-The Country of the Earth
-The Protecting Pillars Start Up
-The Sword Castle Levitates
Posted by Steven "Yoshi" Reich at 10:49 PM No comments:

And our first three from the Victini movies:

-The Pokemon Known as a Legend, Reshiram
-Lure it with a Macaron
-The Legend of the Country of the Earth

And no, that second one isn't a typo (at least, according to Dogasu's Backpack). A macaron and a macaroon are two different things.
Posted by Steven "Yoshi" Reich at 6:26 PM No comments: