Summer's heating up, so here are two new Mystery Dungeon tracks to cool you down:

-Glacial Underpass
-Glacier Palace
Posted by Steven "PokéPress" Reich at 7:33 AM No comments:

The latest Pokemon DVD set has appeared on Amazon.The set is slated to be released on September 10th, representing a nearly four-month gap from the last volume of Black & White. By comparison, the four volumes of Black & White were released at approximately two-month intervals.
Posted by Steven "PokéPress" Reich at 2:24 PM No comments:

On Saturday, June 15th, I got a chance to head over to the Best Buy in Greenfield, WI for the “Nintendo Experience” event. Attendees at this event got a chance to try one of the following games:

I arrived at the store at around 11:15 am, at which point there were a handful of people already waiting in line. This Best Buy featured Nintendo Zone Wireless, so while waiting I was able to watch an episode of Pokémon: Rival Destinies and browse the 3DS eShop. I also talked about some of the games with people who had been there on Wednesday. The Nintendo representatives (there appeared to be three-two male, one female) set up the console, as well as some 3DS systems with previously released games.

Since I was only able to play one game (Super Mario 3D World), most of my comments will be based on observing other players. To give some context, here is a list of how many sessions (counting my own) were run for each game while I was present: 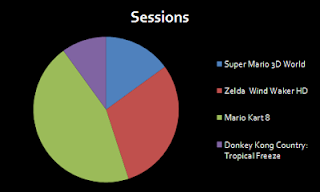 It should be noted that the number of players also varies by demo. 3D World used four players, Mario Kart and Donkey Kong each used two, and Zelda only used one. Adjusting for that: 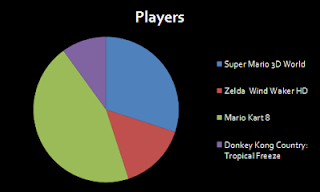 Author’s note-I did not play the original game on GameCube, so my familiarity with that version is quite limited.

There were two options for demos of this game. Players could choose to either play a tutorial from early in the game, or fight the boss battle against Helmaroc King. The tutorial shows off excellent lighting effects, with sunlight coming in through windows and a wonderful haze effect over the ocean. The boss fight showed off the ability to have a large number of feathers on screen simultaneously, much like in the original. In both demos, controls appeared to be easily understood by the players.

This demo consisted of the first two tracks from a GP race. Players were allowed to select from twelve available characters (notable returning characters include Waluigi and Toadette), and each race contained twelve participants and two laps. As shown in the trailer, players could race on the walls or upside down, depending on the layout of the track. Lighting and coloring were both very good (the exhaust from a boost was particularly well done). Most of the standard power-ups were present, but I did not see lightning or the blue shell, though those may still be in the final game. One notable change is that when a player fell off the course, they were placed back on without a fade to black (similar to the original SNES game).

For this game, participants were allowed to sample two levels from a selection of five. The first level I played featured a number of rotating cylinders, as well as the Cat Mario power-up, which I found intuitive to use. Unlike in the New Super Mario Bros games, where the power-ups pop out all at once, in this game each hit on the block generates a power-up. Additional power-ups can be stored reserve that players can access by pressing a button on the controller.

The second level I played used the clear pipe mechanic where players can guide their character . At one point we entered a "Coin Heaven" area in which I encountered a potted sleeping Piranha Plant. I picked it up (somewhat unintentionally), and as I carried it along it ate additional plants and eventually a green star (similar to the Star Coins in other Mario games) at the end of the area.

-Starmen are now "infectious", in that if an invincible player touches another player, that player will also become invincible.
-One of the isometric bonus areas had a baseball that could be picked up and thrown.

This demo was played using the Wii Remote and Nunchuk. There were four levels to choose from (both sessions I observed played the same level). As shown in the trailer, players are required at times to pull objects out of the ground (the players I observed seemed to be unaware of this mechanic). In the case of the level I saw, it was used to manipulate the field so that some platforms would come down. The level also featured a water segment and a portion traveling through trees via a series of barrels. At the end of the level, there was a barrel that cycled between various items. When it was hit, the level was completed and the player received the bonus shown.

Other notes on the event:

-The staff was well-trained and very knowledgeable (the female seemed to have actually met Reggie from NOA).
-Following the demo, players were allowed to pick either a foam Luigi hat or a Luigi coin as a gift.
-All four games looked considerably better than their video versions on the eShop (probably a result of the constraints put on internet video-it's also likely the TV at the store is better than the one I have at home).

Posted by Steven "PokéPress" Reich at 9:55 PM No comments:

Here are the new Mystery Dungeon tracks for this week:

Enjoy!
Posted by Steven "PokéPress" Reich at 11:05 PM No comments:

-Crags of Lament
-Dreams and Hopes
Posted by Steven "PokéPress" Reich at 9:55 PM No comments: